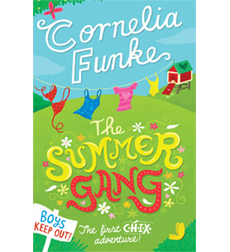 Charlie’s grandmother is away and Charlie has to look after her chickens and do a whole list of other chores that her grandmother left for her to do. What Charlie really wants to do though, is become part of a gang. She convinces her best friend Xa as well as Izzie and Hannah to join them. They decide to call themselves CHIX after the first letters of all their names. They promise to have adventures and keep each others secrets. Things aren’t that simple though as Freddie and his gang like to spy on the girls and make trouble for them. The girls don’t take that lying down and this rivalry escalates into something bigger than either group would have thought. All of them could be in big trouble.

From the author of the Inkheart Trilogy comes a book about friendship. The four girls have very distinctive personalities. Charlie can be a little annoying and pushy at times but she is the force behind the formation of the gang. There are also a few darker kind of secrets that while not focussed on are touched on in a way that may open the door to discussion (abuse, single parent families, the influence of race on family).

One of the things I like about this book is the girls aren’t a foursome that have been tight forever, rather they are two lots of best friends who like to hang together. The rivalry with the boys is fun and for the most part harmless, it drives the story along to a climax that was a little surprising.

This is a story that is a pleasant read and somehow feels older than what it is. In some ways the style and story harken back to a more simpler time. If you are looking for something nice for an 8 to 10 year old then give this a look.