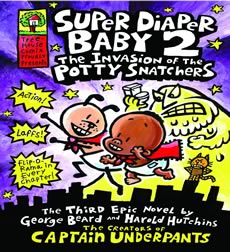 What would you do without your toilet? Well obviously there would be a lot of embarrassed people everywhere to start, but you would begin to ask the question of who would do such a thing? Dr. Dilbert Dinkle started off as the average criminal who robbed the odd bank and invented evil machines. Unfortunately one machine backfired terribly and after a miserable chain of events he soon became “Rip Van Tinkle”, a living, breathing puddle of pee.

Being so furious with what he has become, Rip Van Tinkle and his evil cat Petey set out to express his revenge onto millions of innocent people and their restrooms and he wont let anything stand in his way.

Thankfully, the world has its superhero infant and his trusty dog so rescue them again but will this tall puddle of recycled water be too much for them to handle? Have they finally met their match? Only time will tell.

Super Diaper Baby 2 was an interesting book to read as it was written in a comic book format. Unfortunately it is not a book that I would be likely to pick up and read again as it is targeted at a much younger audience. But this is just my opinion, I do find the storyline intriguing and the pictures very entertaining but being an adult it is hard to follow such potty humour. I used to own a copy of Captain Underpants and I found it very amusing and held onto it for quite a few years but I am guessing if I read it now I don’t think I would find it as humorous.

I thought the idea of having a baby hero and his sidekick was very cute and to have family values included into the storyline to teach kids about family values and the art of saving the world!

In finishing this review I must strongly advise that this book has misspelled worlds and poor grammar, so to all that struggle in this field, please think twice before reading this book.