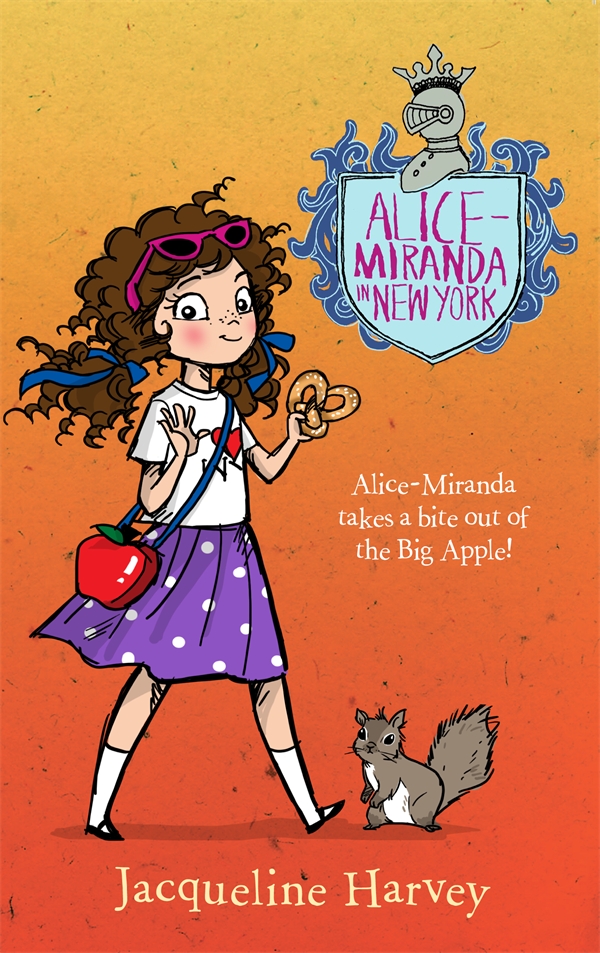 Wow! What can I say, this is a great book! The character Alice-Miranda is charming in a fun way not overly sweet or cute and she has qualities about her that add strength and depth to her character. She is a charming girl who goes about her business in a charming manner.

Alice-Miranda likes to resolve problems without being openly obvious. She has gone to New York for her families opening of a department store ‘Highton’s on Fifth’ and whilst there she will be attending Mrs. Kimmel’s School for girls and the school is run by her mother’s dear friend. AM  gets to spend a month in New York and it is an exciting time for her although her best friend Jacinta who by the way is’ the former second best tantrum thrower’ is not happy about it.

Alice-Miranda takes the reader on a glorious tour of New York whilst trying to find out why her father is anxious about the opening and why her friend who she has only just met won’t invite her over to her house. This would be Lucinda who lives in a world of snobbery and her father just happens to own the rival department store in New York.

Chapter 33 is probably my favourite chapter, it is where Lucinda stands up for herself because her father treats her like a possession and not a person and she really wants to be friends with Alice-Miranda. She is ‘the kindest person’ she has ever met. I believe a lot of young girls will find parallels with their own friendships at school and will be able to relate to the complexities of friendships with other girls.

Children will be able to relate to Alice-Miranda as the voice throughout the book has the knack of making one feel as if one really knows this tiny girl and is on the adventure with her. Her doubts, excitement and overwhelming feeling of happiness whilst she cruises along in New York are infectious! Even though she lives in an indulgent world she is relatively normal and a month in New York is what Alice- Miranda is looking forward to! To experience an exhilarating ride read Alice-Miranda in New York!

Even though the book is recommended for 6+ I find it is quite complex and perhaps may be better read to that age group by a parent so the child can experience the full effect of the adventures, the rivalry between her AM’s father and Lucinda’s father and how it impacts on Alice-Miranda and Lucinda’s friendship. Jacqueline Harvey has done an exceptional task of creating a character who is warm but not fuzzy, powerful but not overbearing, wealthy but definitely not a snob! This is storytelling for children at its best whilst not preaching to children any moralistic views. It is a wholesome fun read that children will enjoy and personally I cannot wait for the next Alice-Miranda adventure to come out!  Absolutely loved it! Star rating 9.