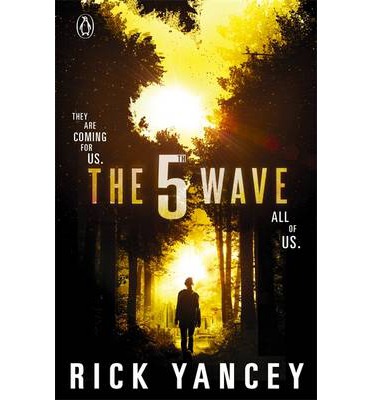 Life was all normal until the day it wasn’t. The first wave took out half a million people, not a very big number in the grand scheme of things. The second wave took out many more and the third took out billions. By then the survivors had no idea who to trust, this was the forth wave.

Cassie is running. Running from those who killed her family, funning from the thing tracking her down. She has no idea how many, if any, humans are left. She can’t trust anyone. Then Evan rescues her and she doesn’t really know if she can trust him. She still has a mission, she promised her little brother, the day they took him away, that she would find him. She is determined not to let him down.

Ben is being trained. Trained to become a killing machine. This does not make him unique many kids are being trained in exactly the same way. They are told this is their best hope for survival. Not every one will make it through the training though, and after the training then what? Just how are kids supposed to defeat an alien race equipped with vastly superior technology? And just what is the fifth wave?

This is a dark, gritty and in moments disturbing story. Cassie is a determined character who is driven to survive and because of the chaos around her doesn’t always make the right decisions. Sometimes she just reacts, and that’s how she gets through. This is not the life she had planned on having. She just wanted to be normal, get through school have a boyfriend. Instead she sleeps with her trusty M16 and has no idea how to trust any more.

Ben has been at his lowest and is determined to get revenge. He is determined to do what is asked of him. Somewhere in there he remains human and feels a responsibility to the youngest member of his team, Nugget.

This story is compelling. The normality of the characters thrown into this situation is what pulls you in. You think you see where it’s going and it then takes you in another direction. The world is ours but a desolate one. Yancey’s descriptions make it easy to see in your mind just what kind of devastation has happened. You feel for these guys and at no time does the author make it easy for them to make the leap from one place to another. They fight for their goals and that is what makes it so engrossing.

The central characters are surrounded by support characters who add depth and emotion to this story. The layers, moments of just being a teenager or small glimpses of humour make it seem all the more real.

If you are looking for a good read, with an alien or dystopian kind of theme then do yourself a favour and pick this up. Well worth spending some time with.