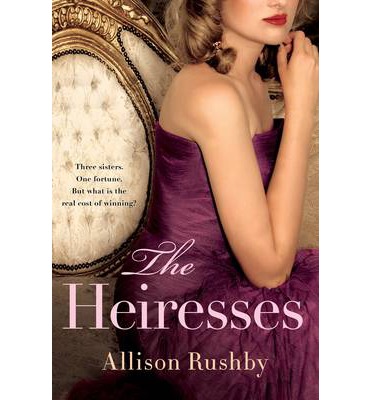 Lady Hestia Craven summons seventeen year olds Thalia, Erato and Clio to London. These girls have had very different upbringings and until they speak to Hestia they had no idea they had sisters, let alone are triplets. At birth, just after the death of their mother they were separated  and farmed out to different guardians. Much to their surprised they discover they are the rightful heiresses to their deceased mother’s estate, quite a fortune, the kind of money that would set them up for life. After some consideration they settle into Hestia’s house and try to begin new lives as they fight for their inheritance.

Things aren’t that simple though, they each have reasons for pursuing the money; Thalia cannot return to a past with dark secrets, Erato has dreams that may be moving out of her grasp and Clio wants nothing more than to look after the only mother she has ever known. In the complexities of this new life the girls come to realise they cannot trust anyone, will they really find a way to join together and get their mother’s legacy?

A sweeping tale of a time where women had less options. These characters are very different and one is likely to appeal if another doesn’t. Thalia is a party girl, hiding a secret; Erato is smart and doesn’t want to be limited by pursuits deemed appropriate; Clio is more about a happy, contented life, she is the most contained of the three and the most likely to find happiness because she finds it in small things. The world these girls are thrust into is the spectacular and fun 20′s London, changing fashion, motor cars, and short hair for women. They are ill equipped to do battle with their half brother for the money, as they don’t know the rules that dictate the upper classes. They hope for reason but have to find a way that gives them the upper hand.

An entertaining story with some dark undertones, suffrage themes and a past that unfolds slowly as the three sisters come to realise a little of what family is, and a understand a little better who they are. If you like historical romances with a touch of scandal then definitely give this a chance.